A couple of author events

I did two author events this week, one a program called “Drawing Funny Animals” at my local, the Talbot County Free Library. The other was an appearance at a family literacy night at Mount Royal Elementary/Middle School in Baltimore.

The first was based on my how-to-draw book More Creatures and Characters. I began by reading a couple of my books that have funny animals, including If You Give the Puffin a Muffin. I then showed a few of the ways that you can create characters, doodling, sketching and scribbling. After that the kids had the chance to do their own scribble and sketch drawings. I gave them some sketch starter pose print-outs that they can turn into their own characters.

While they drew I walked around talking to them about their drawings and answered some questions from a couple of the parents. I also offered a sneak peek at “untitled“, which has a couple of funny animals as the main characters.

I attended the family literacy night as part of the Read Local Challenge: Maryland, Delaware, Virginia, & Washington DC.  Sorry, I have no pictures of this event. The students and parents attended “stations” of which I was one. Kids came in dribs and drabs, I read a few books, I did some drawings with some of the kids and I talked to them about my books.

One young boy was very excited to see all of the books I had put into I Hate Picture Books! He could hardly contain himself. The teacher who was my helper for the evening explained that he was special needs, which was obvious, but he was also very smart and had a great memory. He came back to talk to me a few times and I decided to give him a copy of If You Give the Puffin a Muffin. He came running back into the room when he realized I had put myself into the book, which he thought was hilarious.

Speaking of that, I usually dress a little bit nicer for events but lately I’ve done a few dressed in my ratty sweatshirt. That’s because it’s the outfit that I drew myself in. As you can see, I even included my reading glasses. 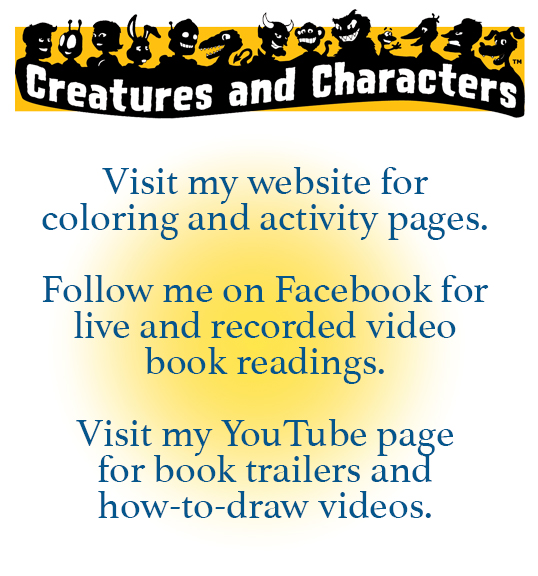 Count the blackbirds.
It’s Squirrel Appreciation Day. While I am fond of all squirrels I wish we had rainbow colored ones where I live. #squirrels #kidlit #kidlitart #authorsofinstagram #bookstagram
While I was in Keyport yesterday I visited a couple of memories. I used to go down to the waterfront as a kid and look over towards NYC. I didn’t know then that I would live there for a decade. I also walked a bit on the Henry Hudson trail and found the railroad trestle over the creek behind my old house. We used to play there and it was cool when a train went overhead. I used to walk to school on the tracks. The freight trains did not run very often.
Yesterday’s visit to Keyport Central School was fun. The students were an excellent audience and the vice-principal posted these to Twitter. I love visiting schools and I’m hoping to book a lot of visits this spring. #authorvisits #schoolvisit #bookstagram #kidlit #kidlitart #authorsofinstagram @hownowbooking
I’m heading off to Keyport, NJ for my first school visit of 2023. It’s the school I attended as a kid. I last visited in 2016, I’m presenting in the lunchroom where I ate from 1st through 8th grade. #authorvisits #bookstagram #authorsofinstagram #kidlit #kidlitart
I’ve needed new author photos for quite some time. Which should I pick? #authorsofinstagram #bookstagram #kidlit #kidlitart #headshot